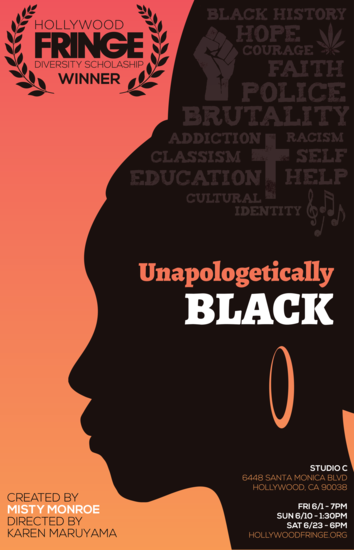 Unapologetically Black is a true story about Misty Monroe trying to fit in as a Black woman (with a white name) who grew up in both South Central Los Angeles (predominately black) and the naval bases of Northern California (predominately “Other”). In an effort to fit in she learned it was easier to hide her love for Madonna, Tears for Fears and Growing Pains from her Black friends and to make sure her White friends never knew how Ebonically fluent she really was. It was difficult, she never felt like she could be her authentic self in either of those environments and because she spoke so “good” White people assumed she was a “different/better” type of Black person and Black people thought she was trying to act white, revoking her “Black card”. The truth was Misty and her family suffered from drug addiction and tragedy consistently. Eventually Misty attended a lecture about “The Stages of Nigrescence” and realized that her journey to be her authentic self, no matter the environment, is not uncommon for Black people. The desire to “fit in” is universal and Unapologetically Black takes you on the journey of a Black woman who gains the courage to stand out, unapologetically.