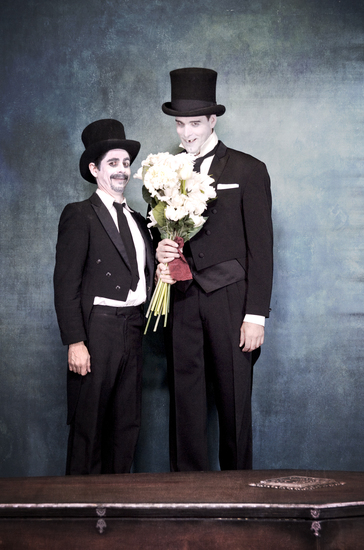 This largely non-verbal show runs under 1 hour, with no intermission.
www.tenwest.net
Tickets $15

LA WEEKLY REVIEW OF INEFFABLE
NEW REVIEW GO INEFFABLE Two agile and inventive clowns with highly expressive faces, Jon Monastero and Stephen Simon (known collectively as Ten West) enliven a droll fantasy about the journey from life to death. Directed with grace by Bryan Coffee, their sly comedy is as much Cirque du Soleil as it is Chaplin-esque, with a little commedia dell’arte thrown in… and yet the show is over too soon. Ineffable means indescribable—suggesting their brand of cleverness should be seen firsthand. Theatre of NOTE, 1517 N. Cahuenga Blvd., Hlywd.; Fri., 8 p.m.; Sat., 10 p.m.; thru June 25. hollywoodfringe.org/projects/489 (Melinda Schupmann/BS)

What critics say about Ten West:

“These two actors are able to hold the audience rapt with their clever shenanigans and amazing feats of agility, they keep us amused and inspired.”  – Hettie Lynn Hurtes, KPCC Radio

“Their work is admiringly classic in feel, fun yet sinister, always intimidatingly hilarious, and held in the highest of regard by anyone with a sharp wit and the luck to have seen them live.”
– Kevin Chesley, writer on MTVs The Hard Times of RJ Berger

TEN WEST is the comedy duo of Stephen Simon and Jon Monastero under the direction of Bryan Coffee. Their show, The Understudies, played to sold out houses, standing ovations and was a festival favorite in last year’s Hollywood Fringe Festival.

Ten West’s signature blend of physical virtuosity and inventive comedy, joined with poignant writing, broad audience appeal, and a unique theatrical style inspired by vaudeville, commedia and clowning, has made them critical and audience favorites everywhere.