In the Valley of the Shadow 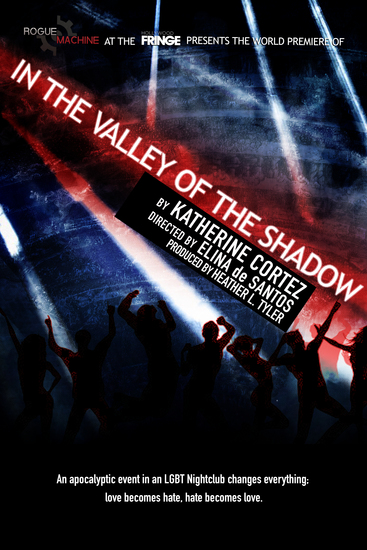 “…without a doubt the most powerful piece I’ve seen so far in the Fringe…” – Stephen Fife, Better Lemons
“…cunningly cast with superb actors…The show benefits from an excellent creative staff, starting with smart, fast paced direction by Elina de Santos…” – Paul Myrvold, Theatre Notes
“… a stunning piece of theatre…sure to be one of the highlights of the 2017 Fringe Festival.” – Rob Stevens, HainesHisWay

A World Premiere play by Katherine Cortez, inspired by a collision of events: growing up in Orlando with no openly gay nightclubs, witnessing family and friends hiding in shadows and losing lives to AIDS before it had a name; completing the AIDS LifeCycle ride, and then…The Pulse nightclub shooting on the eve of LA PRIDE.

The play reflects on how fundamentalist belief systems can give a perverse inspiration to the execution of hate in the name of “love.” Exploring our duality as human beings – a paradoxical species capable of both violence and its opposite – the play challenges audiences to examine our darker parts in order to integrate the shadow and move towards the light, transforming hate into love.