The Faggot King or The Troublesome Reign of Edward II 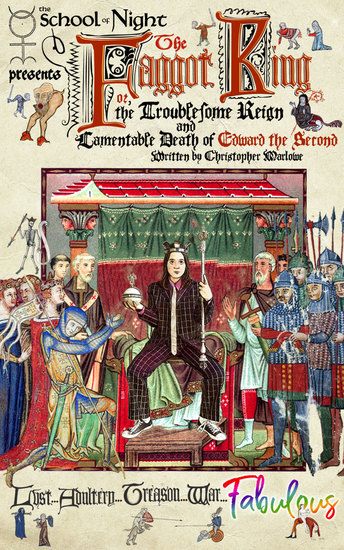 The award winning creative team behind last summer’s Punch and Judy gets medieval on your ass with the earliest and bloodiest gay drama ever composed in English. The Warrior-King Edward Longshanks has died and his son has ascended to the English throne. Though the armies of Scotland and France menace his borders, the new-crowned Edward II remains oblivious, preoccupied with pining for his exiled lover Piers Gaveston. In ordering Gaveston’s return despite Longshank’s dying wish to the contrary, young King Edward provokes the outrage of the church. The many disturbing changes that accompany Gaveston’s return arouse the alarm and anger of the English nobility. And when Edward’s humiliated Queen allies herself with the rebellious Earl of March in a desperate bid to be rid of her hated rival Gaveston, the stage is set for a war that will divide and consume the realm.

The School of Night is proud to present a raucous blend of song, sex, spectacle, horror, gender-swapping, clashing steel and versified bombast such as only the most controversial playwright in the English canon could conjure.

Please note: We are not able to accommodate wheelchairs

CASH ONLY at Box Office.