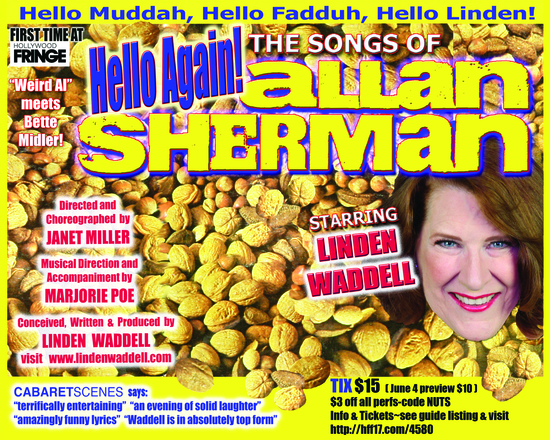 What happened during this HW Fringe debut?

“Don’t Miss It! Full out and nonstop laughter!” — BroadwayWorld.com

“Outstanding! A firm two thumbs held up to the stratosphere, PLATINUM MEDAL!” — The TVolution.com

“Get ready to sit back and laugh…we had a ball…totally entertaining!” — BroadwayWorld.com (Barrett)

Come see what all the hoopla is about!
1 mo’ time – let’s say HELLO AGAIN! To the Songs of Allan Sherman!

In “Hello Again! The Songs of Allan Sherman,” award-winning singer/comedienne Linden Waddell pays homage to this comedy icon by performing a delightfully humorous compilation of his wittiest ditties. Sherman won a Grammy Award for his best-known song, an international hit about a child’s letter home describing a miserable camp experience in “Hello Muddah, Hello Fadduh,” so this show says “Hello Again!” to the songs of Allan Sherman.

Directed and choreographed by award-winning Fringe veteran Janet Miller, with live accompaniment by renowned musical director Marjorie Poe, the 55-minute concert enchants Sherman fans and newcomers by presenting some of his most recognizable parodies, and also lesser-known material, sure to enlighten even the most diehard Sherman enthusiast. These fun, silly, droll songs are presented in a zany yet professional performance by Miss Linden Waddell (Shubert Theatre’s CATS, Ahmanson Theatre’s The Pirates of Penzance) whose golden voice, comic presence and versatility prompted these responses:

“Waddell did them all justice with her strong, wide-ranging voice, which encompasses a soaring soprano, a Merman belt and a solid feel for sweet irony. When combined with extremely well-developed acting chops, she was in absolutely top form singing great songs with familiar melodies and amazingly funny lyrics.” ~ CABARETSCENES

“the packed audience at Gardenia gave Waddell a roar of final applause, the equivalent of a string of curtain calls” ~ Don Heckman, THE INTERNATIONAL REVIEW OF MUSIC

The nutty revue features traditional folk and ‘60s pop songs, Great American Songbook standards and musical theatre classics by Cole Porter, Richard Rodgers, Harold Arlen, Jerome Kern, George Gershwin, Henry Mancini and Irving Berlin, who called Sherman “the most ingenious and brilliant parodist in the history of songwriting.” The show is rated G – suitable for all ages – with huge appeal for Baby Boomers, fans of The Dr. Demento Show and Weird Al, the Jewish community, and those who are nostalgic for the ‘60s. But younger audiences embrace the wackiness too, with enthusiasm. Inventive props, audience participation, even a pre-show quiz handout make “Hello Again! The Songs of Allan Sherman” a true crowd-pleaser for anyone who loves to laugh.

Critic Don Heckman, THE INTERNATIONAL REVIEW OF MUSIC: “a captivating evening of music and humor” * “gales of audience laughter” * “an evening’s worth of hilarious songs overflowing with gag lines in virtually every phrase”

Tom Rolla’s THE GARDENIA: “(a) taut, perfectly executed romp of a show”

Let’s take a BREAK from today and LAUGH by saying hello, again, to the songs of Allan Sherman!

NOTE: The Stephanie Feury Studio Theatre is on the 2nd floor, only accessible by stairs. The theatre is not ADA accessible.