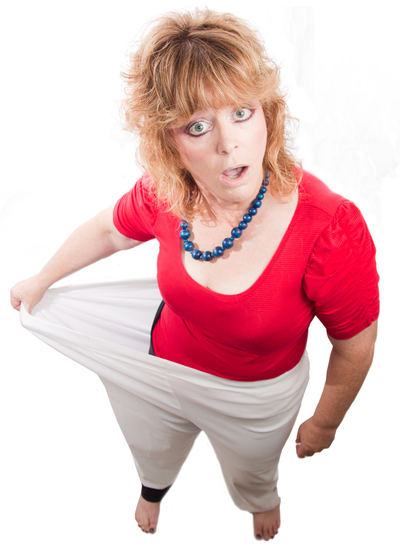 Seriously. True. No bullsh#t. Em was an elephant, then she lost 187 pounds. The thing is…elephants never forget.

“This is the story of how I made my ass look smaller simply by pulling my head out of it”, says Em.

When it comes to the Obesity Crisis, taking two Krispy Kreme’s and lying down is not the answer. National Raw Comedy Winner (2001) Em O’Loughlin used to weigh more than two blokes! Then she lost a whole bloke…and she didn’t even get divorced. Join Em on a brave and funny gut-busting journey that lifts the lid on being a fatso, licks it clean and chucks it in the bin.

“…honest and insightful show; energetic, animated and whacky.”
Rip It Up – Fringe 2010 Reviews

“With the packed room … chortling, O’Loughlin proved you can be jolly at any size.”
Adelaide Advertiser – 2010 Reviews

But they’re a little cautious about laughing too loudly when the presenter is the ‘elephant’ in the room.

Em O’Loughlin … encourages the audience to laugh with her at herself and her history as she shares her story on how she ballooned from the equivalent to 48 Krispy Kreme donuts at birth, (roughly two kilograms, or six pounds), to a heavy duty fridge.

“With an ice-machine installed,” she adds.

“And a frozen turkey inside it.”

… Em’s story is well worth hearing.