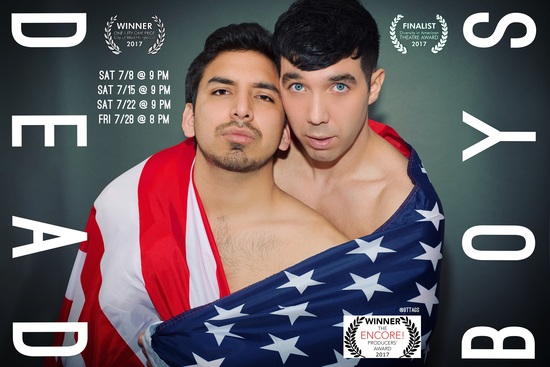 WINNER OF THE ENCORE PRODUCERS AWARD, WINNER of ONE CITY ONE PRIDE’s West Hollywood Scholarship and FINALIST for the DIVERSITY IN AMERICAN THEATRE AWARD. After a SOLD OUT run in the Hollywood Fringe, DEAD BOYS is back for four final shows.

“One hour of brilliance! Hysterical one moment and then leaves you breathless with emotion. Montgomery’s acting is superb!” – Del Shores

“If you see one play this year, make it this one! Montgomery gives the finest performance I’ve ever seen at Hollywood Fringe.” – certified Fringe reviewer

“The show may be titled ‘Dead Boys’ but you would be hard pressed to find two actors who are more alive. You might pay for a whole seat, but you’ll only need the edge of it.” – Better Lemons

“I was blown away by this show – heart-breaking and raw, with an ominous undertone and creepy overtone. The performances are stellar, Matthew Scott Montgomery will make you laugh and cry, and Andrew Puente is haunting and grounded. The show’s run-time is a short hour, that really transports you to a time-and-a-place. Not one I’ll soon forget. Go see it!” – Horror Honeys

“DEAD BOYS is exciting, comical, emotional, and thought provoking. Writer, Matthew Scott Montgomery, in such a short amount of time, manages to capture some of the deepest fears, struggles, and emotions that Mexican-Americans and LGBTQ people go through. All while making you laugh with his light moments and incredibly unique dialogue. Do not miss this.” – Bella Donna Magazine

“Dead Boys is a funny, poignant and emotionally insightful play about what it means to be alive – all set against the backdrop of an apocalypse. You’ll laugh and you might also cry. Highly recommend this show!” – Creep Los Angeles

“An incredible piece of acting, writing and directing. A hilarious and powerful piece that shouldn’t be missed.” – Boys and Ghouls

The end of the world. Two millennials trapped in the basement of their old high school. The only gay kid in school. And the guy who used to beat him up. Provocative, hilarious, and heartbreaking, DEAD BOYS is about two modern American young men who have no choice but to face fate, race, sexuality – and each other.