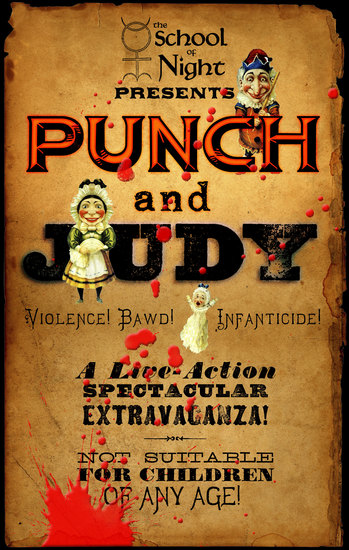 “The six cast members are all outstanding. This is a brilliant and hilarious show” -ArtsBeatLA

“A show that is a genuine case study of style and comic delivery that deserves to be preserved in amber.” -TheTVolution

Highly Recommended. “Punch and Judy is that very rare thing, a truly classy fringe show, with no caveats or reservations.”-FringeReview

This live-action adaptation of the western world’s most enduring popular entertainment follows the beloved and irascible domestic abuser Punch on a hilarious and kill-crazed day of adventure. All your favorite characters are sure to put in appearances: Judy, Pretty Polly, Scaramouch, Jim Crow, Toby the Dog, Jack Ketch, Hector the Horse … even Old Nick himself, the Devil and Prince of Lies, will wind up on the receiving end of Punch’s tomfoolery.

Mr. Punch will tickle your ribs as he bludgeons, stabs, slashes, burns, shoots and inappropriately gropes his way straight into your heart.

Not recommended for kids.

“The best reason to see this Punch, however, is that Johnson has assembled one of the ablest and most expertly timed physical comedy ensembles in recent memory. Johnson has replaced the traditional miniatures with live actors…. and staged the results as highly polished and pitch-perfect commedia dell’arte.”
-Bill Raden, Stage Raw

Jen Albert devised the fight choreography for several scenes and these are some of the best and most versatile fight sequences that I have seen on an L.A. stage.
-Pauline Adamek, ArtsBeatLA
~~~~~~~~~~~~~~~~~~~~~~
For full reviews: