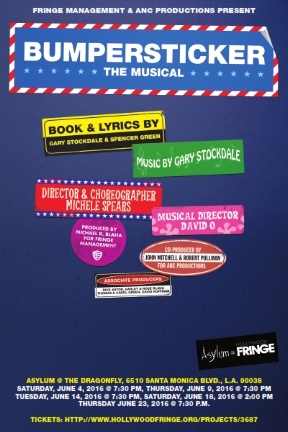 BUMPERSTICKER: THE MUSICAL is the brainchild of Gary Stockdale and Spencer Green, who created BUKOWSICAL, the acclaimed musical about besotted literary hero Charles Bukowski which won Outstanding Musical at the New York International Fringe Festival. BUMPERSTICKER is set during a massive urban traffic jam, with each song inspired by one of those blunt, punchy slogans you’ve seen on the backs of cars throughout your life—and, yes, may even have put on the back of your own car.