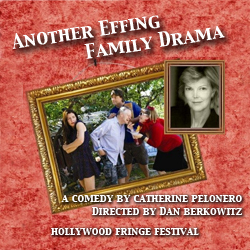 NOMINATED FOR BEST IN THEATRE, 2011 HOLLYWOOD FRINGE FESTIVAL. The family drama has never been so raucous nor rudely hilarious as in this new absurd comedy by Catherine Pelonero (Family Names, Awesome Ghosts of Ontario), directed by Dan Berkowitz. This is the story of June, a self-proclaimed sympathetic main character full of needs who comes home to have a good old-fashioned confrontation with her ailing mother. Her hopes of kitchen sink drama are dashed, smashed and served up raw when she finds the Effing family invading her space. If you’ve ever groaned at the sight of a living room on stage, if you’ve ever wanted to tear your own hair out when angst-filled characters start spewing their dark secrets, if you’ve ever wanted to punch Eugene O’Neill in the face, this is a show for you! It’s Another Effing Family Drama! Please note: Due to the graphic nature of this play, no one who thinks Death of a Salesman is the best play ever written will be admitted. Also, no one under 16 should see it, unless you have really cool parents who don’t mind you seeing shows with mature situations and language. Press photo(s)by Sebastian Millito.