Mark Twain Answers All Your Questions! 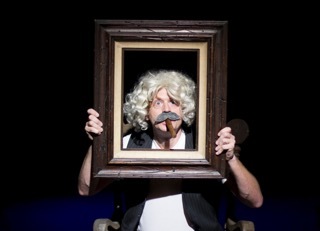 From the folks who brought you last year’s Winner for Best in Comedy (The Poe Show), MR. MARK TWAIN ANSWERS ALL YOUR QUESTIONS, is an eruption of one-man insanity complete with funny wigs and a real rocking chair.

Critics and audiences are unanimous: See this one first!

“Seriously. Anything. GO SEE THIS SHOW.” -Benjamin Schwartz, Gia on The Move

“Ed Goodman’s Mark Twain is much funnier than Daniel Day-Lewis’s Lincoln.” – ANONYMOUS (and then they hacked our Twitter)

Fresh off his award-winning performance at last year’s Poe Show,* Mr. Mark Twain is back with his one man show! This June at the new Sacred Fools space, Mr. Mark Twain will be shooting out the lights with stories, observations, and general nonsense (with extra nonsense on the side). If he fools around long enough, he may even say something worth repeating.

*First of all, it was a year ago so “fresh” may be overstating the matter. Second of all, the SHOW won an award, Mr. Twain was not mentioned. And third of all there is no third of all. Buncha nonsense!