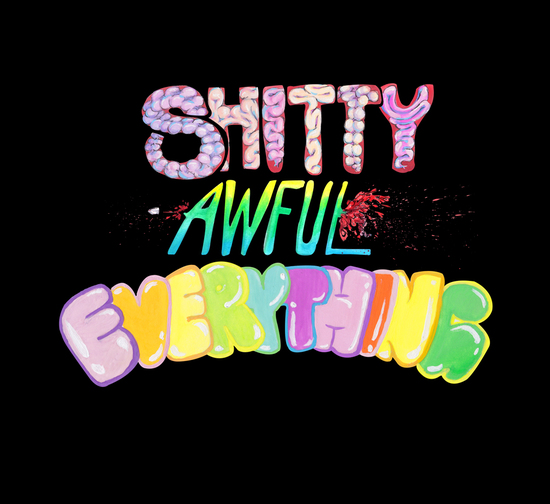 “Funny, very, very funny, as well as shocking, bawdy and brave. I honestly still can’t stop thinking about this show…it’s that brilliant…genius in fact. You have to see this show!!!” – Samantha Simmonds-Ronceros, NoHoArtsDistrict.com

“Shitty Awful Everything is a totally trippy play that embraces meta conventions, intertexuality and postmodern absurdism.” – Benjamin Schwartz, Gia on the Move

“…a live action dark comedy wrapped in the style of a Looney Tune on acid and adderall. It’s bloody, it’s dirty, it’s wrecking it like Ralph and it’s an absolute comedic gem.” – Brandon Pearson, patron

“Shitty Awful Everything is exactly not that. It is an hour that will have you laughing, even as you’re drenched in blood… I loved it.” – Frank Rada, patron

“It’s a fun show that has a lot to offer people in terms of off-the-wall comedy.” – Matthew Robinson, patron

“A thoroughly fun ride! Wasn’t sure what to expect when I was invited… but I sat here with a smile on my face throughout. I encourage you to see this one!!!” – Sherry Lyn, patron

“And in the end, when I was finished laughed, I thought a little. And felt a little. Which is more than many plays deliver. So—bravo!” – David McDowell Blue, Through Night Tinted Glasses

WARNING: You may get bloody!

NOTE: The midnight show on the 18th is technically the 17th at 11:59pm. One free beer with every ticket purchase for this performance (ages 21 and over)!