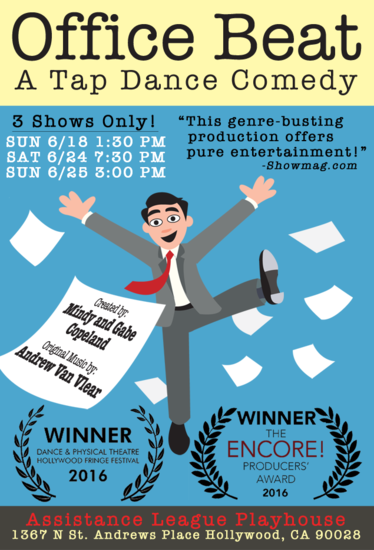 “Office Beat, a new show created by Mindy and Gabe Copeland, is billed as a “tap comedy.” …. But those words do little to relay the pure entertainment this genre-busting production offers…Catch Office Beat while you can.” – Michael Van Duzer, Showmag.com

“Office Beat treats one to a cross section of styles that serve almost as a history of tap’s development and in the process recalling the grandeur and scope of one of those magnificent fantasy segments from the golden era of MGM musicals.
This is not only a show you shouldn’t miss, this is a show you shouldn’t let your kids, neighbors or even your nasty old Uncle Harry you haven’t spoken to in twenty years miss!
And let me extend to the Copelands and the Tap Overload Company my hearty congratulations for a superlative Fringe debut and our sincere hope that you join us again next year.
And the year after that, and the year after that, and the – oh, you get the idea.
This one is pure: GOLD” – Ernest Kearney, The Tvolution

“Tap Overload’s Office Beat-A Tap Dance Comedy is sure to be hailed as one of the most creative endeavors of the current Hollywood Fringe Festival. Writers, directors and choreographers Gabe and Mindy Copeland have created a truly unique experience that will have you smiling from ear to ear, from start to finish.” – Rob Stevens, HainesHisWay.com

“It is a cute concept, and the tap dancing is great! Every last one of the dancers on the stage does a great job and has seemingly unlimited energy. … If you are a fan of tap dancing, or have never really experienced tap dancing, check out this show. It’s worth your time.” #SeeItLA – Kat Michels, See It or Skip It LA

“Tap Overload’s Office Beat is a fun one hour tap musical with its story told entirely through tap dancing (no dialogue). You’ll smile all the way through this delightful show!” – Ellen Dostal, Musicals In LA

Office Beat is a light-hearted, toe tapping, family friendly dance comedy. Tappy workers once happily shuffling through their days are in for a dramatic flap ball change. The arrival of a new Boss brings a strict NO TAP DANCE policy. There’s a revolution under foot as everyone unites to bring tap dance back to the office!

ABOUT THE DIRECTORS:
Mindy and Gabe Copeland are professional choreographers and performers. In addition to directing Tap Overload, their credits include national and international television, stage and film productions.