Victory?! some names have been changed to protect the guilty 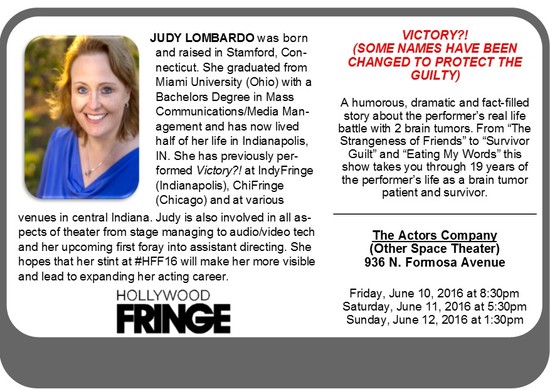 Victory?! (some names have been changed to protect the guilty) is a humorous, dramatic and fact-filled story about the performer’s real life battle with 2 brain tumors. From “The Strangeness of Friends” to “Survivor Guilt” and “Eating My Words”, Victory?! takes the audience through 19 years of the life of this brain tumor patient and survivor. It was first performed six times, at the 2012 IndyFringe Festival in Indianapolis, IN.
“Victory?!” as it is affectionately called was a part of ChiFringe 2013 in Chicago, IL.
Additionally I have performed it at several venues in central Indiana. It was also showcased at the 2012 Playwrights Festival in October 2012, Irvington, IN.