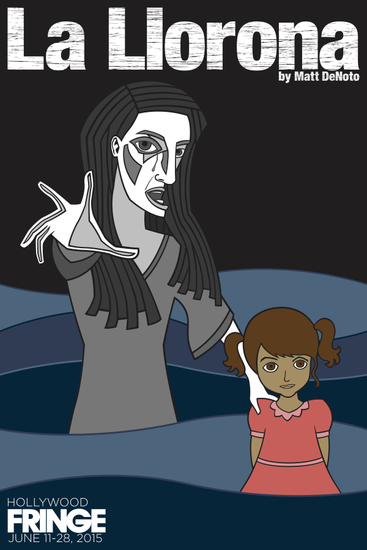 The horrific legend of La Llorona, widely believed in all generations throughout Hispanic America, comes to life— with terrifying new details. Hundreds of years ago, beautiful Maria’s husband’s betrayal drove her to madness, which culminated in an unthinkably brutal act. Maria’s tragic crime immediately doomed her to suffer unbearable regret for the rest of her life— and beyond. Now all children had better respect their parents, never dare to venture outdoors alone at night, and always stay away from rivers, or else beware of swift abduction by the wailing woman— La Llorona!

Writer Matt DeNoto’s stage version of La Llorona leaves all of the standard elements of the legend intact, yet ingeniously fills in and reimagines the story’s specifics, to thoroughly chilling effect. His portrayal of the lives of two mothers in extreme distress, one in long-ago Mexico and one in present-day U.S.A., yields a tale scary enough to make grown men and women squirm in their seats. The strange intersections of the humorous and the horrible are DeNoto’s specialty, and his debut work as playwright is sure to delight and disgust theatre-goers of every sort.