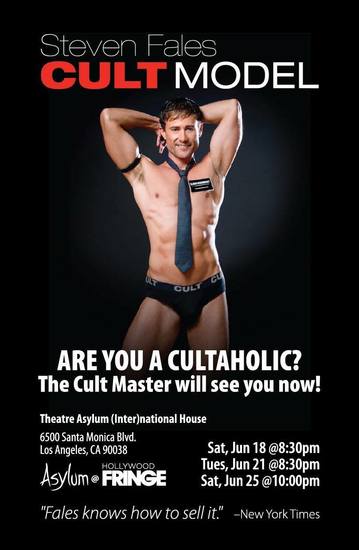 Are you a Cultaholic? Then the Cult Master will see you now! Steven Fales (Confessions of a Mormon Boy) has a new solo cabaret/comedy CULT MODEL. Does someone you know suffer from Obsessive Cult Disorder? Where does their religion, MLM or political party fall on the Cult Scale (0-6)? Are you getting enough value out of your cult or is it getting diffi-cult? New songs, parodies, stand-up and monologues about our Cult-Susceptible Culture. “There’s not a cult I haven’t tried—or secretly wanted to! If it’s not a cult I’ll make it one. You can take the kid out of the cult but you can’t take the cult out of the kid! I’d like to buy the world a cult…” Everything you ever wanted to know about Cult Brain but were afraid to admit!Leave your common sense at the door as the enter the Cult of Personality and Perfection.

Coming to the Metropolitan Room in NYC this fall!

From the creator of the international off-Broadway hit and LA Times Critics’ Choice “Confessions of a Mormon Boy” comes Steven Fales’ new solo comedy CULT MODEL exploring our society’s harrowing cult susceptibility and his own obsessive cult disorder. You’ll be surprised at what he considers a cult! With hilarious parables and parodies Fales takes on each of the many cults he’s let run his life as he takes each layer of clothing off.

“Fales knows how to sell it.”—New York Times; “A masterful storyteller and one hell of a writer.”—SF Examiner; “Fales is easily among the best, if not the best, solo performers in the business.”-David Clarke, BroadwayWorld.com

This world-premiere began as a stand-up show Fales wrote called CULT! while bored out his mind on days off during a ten-week run of “Confessions of a Mormon Boy” at the Coconut Grove Playhouse in Miami in 2003. Later that summer he performed it as a presentation at the 2003 Sunstone Symposium in Salt Lake City (the Mormon International Fringe Festival) and was performed as a benefit for the Utah AIDS Foundation at Wise Guys Comedy Club before being shelved. Fales found the hostility against him so great that he was afraid that he would be kept from seeing his children as the non-custodial parent if he continued to perform it. At the time, his ex-wife was raising the children very Latter-day Saint. He also had a few more cults to try before letting them all go. Now that the children are grown, the gloves are coming off. He’s fighting for all of us to kick our cult habits and learn to think and act for ourselves.

Fales quips, “There’s not a cult I haven’t tried . . . or wanted to. Today I’m cult free. I feel pretty naked. But that might not be such a bad thing. Still, I’m looking for a new cult. Are you it?"

This is the first of many 60-minute solo shows he is working on including “When All Else Fales” and “Simply Undetectable”. His 90-minute solo plays in “Mormon Boy Trilogy” include “Confessions of a Mormon Boy”, “Missionary Position” and “Prodigal Dad”. His cabaret acts include “Mormon American Princess” and “Mormon American Cowboy”. He has performed his work from Lincoln Center to Joe’s Pub; from Halifax to Houston; from London to Los Angeles. He received an Outer Critics’ Circle Award Nomination for the off-Broadway run of “Confessions of a Mormon Boy” at the SoHo Playhouse. Fales holds an MFA in acting from the University of Connecticut. Fales was an LDS missionary to Portugal and is an Eagle Scout. He holds extensive credits in film, television and theatre for the LDS Church as well as mainstream.