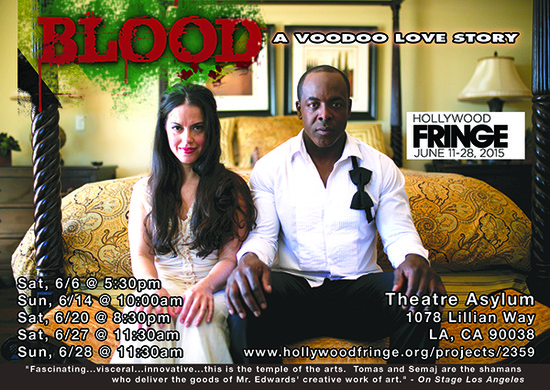 -“It’s fascinating to witness Tomas and Semaj present their dance of many characters, reflecting the frustrations of a cooling affair at the same time insatiably making the beast with two backs. Edwards’ script is tight. Solid performances make this an hour well spent.”
Michael Sheehan – ON STAGE LOS ANGELES

AUDIENCE REVIEWS:
- “A must see again kind of experience! Loved it.” – RC
- "The stage is filled with a passion that will stay with you. Recommended!- CC
- “The performances are truly captivating. . .chemistry is fantastic.” – KS
- “…a rollercoaster of emotions.” – IR
- “A brilliant vision of the sexual politics that manifest between lust and love, man and woman.” – DE
- “I want to see it again!” – KY
- “Incredibly entertaining & spooky as hell.” – WCS
- “A tight little gem of powerhouse acting… a script so raw and pithy the hour zooms by and leaves you reeling. I’ve never seen such creative exploration of insatiable female sexuality… though not for the prudish!” – NM

That might sound a little extreme, but the couple in BLOOD is not just any couple. When they were married by a Voodoo Priestess in Jamaica, a third party was bound together with them in their union- a female demon who feeds on sexual pleasure, a succubus named BLOOD. If they do not satisfy her, she will kill them.

Writer/director Michael Phillip Edwards neatly dissects racial as well as gender politics to create a daring, spirited work that effortlessly makes the case for female and male sexuality in the same breath.