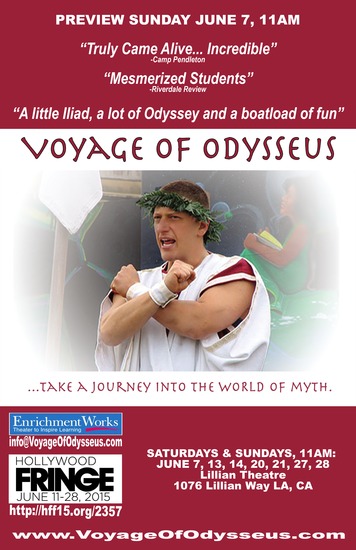 “.. a reminder of how mesmerizing theater can be with nothing but a few simple props, a talented performer and a meaty story, Voyage of Odysseus works wonders.”
JOEL BEERS / BITTER LEMONS REVIEW

“A gifted physical actor, Feinman peppers his performance with facial contortions and silly walks and even though he’s both director, performer, traffic cop and, occasionally, elementary school teacher, he keeps the free-wheeling intensity on track, kind of an important thing to do when relating some of the key points of a 20-year saga in less than an hour.”
JOEL BEERS / BITTER LEMONS REVIEW

“Grown-ups can appreciate Feinman’s talent and the opportunity to turn their minds off for a little while in favor of their imaginations, while kids will absolutely get a kick out of it.”
JOEL BEERS / BITTER LEMONS REVIEW

A one man show that’s a little Iliad a lot of Odyssey and a boat load of interactive fun!

Greek King Odysseus (Joshua Feinman) bids farewell to his wife Penelope and his son Telemachus and invites students in the audience to take a journey with him into the world of myth.

First stop: Troy, where, after a long siege, the Greek soldiers hide inside a statue of a giant horse, presented to the city as a ruse to penetrate its defenses, and win the Trojan War. On the return voyage, Odysseus stops on an island where he is captured by the cave-dwelling monster Polyphemos. He blinds the giant cyclops in order to escape and resumes his voyage home. Next, our hero encounters Circe who turn his sailors into pigs then back into men again after she falls in love with him. Odysseus sails past the sirens and resists their dangerous song, after which he battles the whirlpool, Charybdis and Poseidon, God of the Sea.

Finally, after 20 years at sea, he returns to his family. Penelope is surrounded by suitors who want to marry her, but she remains faithful to her husband despite his long absence. Odysseus, disguised as a stranger, scares the suitors away, then reveals himself and reclaims his family.

Written and performed by Joshua Feinman. Directed by Abraham Tetenbaum.