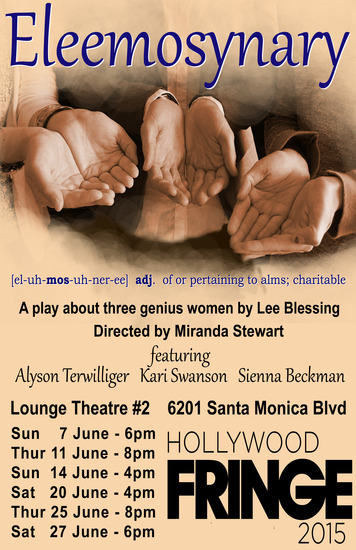 “The actors live up to the material, each bringing her own unique style. You forget you’re watching three women of roughly the same age as they fully inhabit their roles of brightly eccentric grandmother, quietly struggling mother and precocious, wounded daughter. See this, y’all.”

“It is relatable and tugs at the heart strings. If you like character drama, see Eleemosynary.”

“Director Miranda Stewart has staged the play with eloquent simplicity, cannily keeping the production attuned to the ebb and flow of the playwright’s beautiful language which in the adroit handling of these three skilled actresses fills eighty minutes with wit, sarcasm and surprising sweetness—a bracing evening of swiftly paced ensemble playing marked by grace notes of remembrance, regret and forgiveness.”

“Captivating from start to end.”

“This is a lovely, minimalistic production with strong performances from all three women and worth your time and money to go experience.”

“The actors were all superb and believable in their unbelievable roles, and the set proved to be just perfect. Two thumbs up”

This simply staged play by Lee Blessing delves into the relationship of three genius women. Artie fights the willful force of her mother, Dorothea, to become her own person, rather than the woman her mother would like her to be. At the same time she struggles with her relationship with her own daughter, Echo, who is closer with Dorothea than she is with Artie.