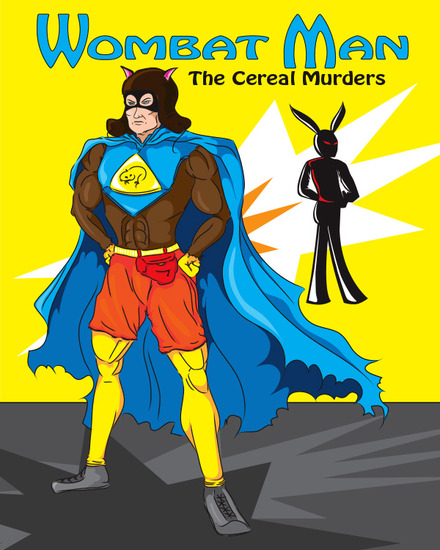 Wombat Man: The Cereal Murders is “a kid’s show for adults” filled with color, camp and all things that made the Adam West Batman TV series a nostalgic favorite.

Follow the fur-coated caped marsupial, Wombat Man, as he fights to defend Slothum City from the evil Trix the Rabbit who will stop at nothing to get his fruity tasting Trix cereal. Trix, fed up from his years of ridicule and torture at the hands of selfish children, finally snaps, leaving behind him a wake of dead cereal icons. It is up to the always courageous (and often childish) Wombat Man to take down Trix and his gang of sick cereal stooges. Wombat Man throws punches and puns as he recruits a reluctant sidekick to join him in his crime fighting. Even if you’ve spent your entire life underground in a wombat burrow and have never seen any of the Batman franchise, you will still laugh and cheer as Wombat Man fights to save the day.

the sidekick to be named later