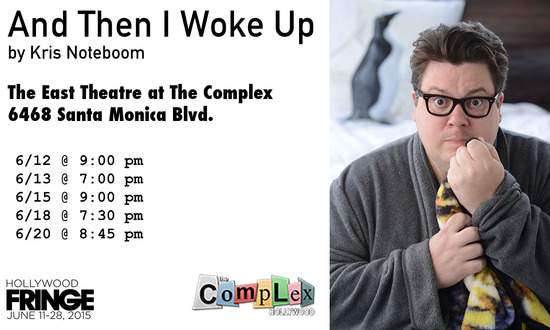 It was never put more simply than when one of his advisors once told Kris Noteboom, “You’ve gotta find your thing.” Even in that moment, it didn’t hit home. But, in “…and then I woke up” Kris humorously explores the gravity of this statement through an autobiographical reflection on his trouble with dreams. Having always suffered from bad dreams, both waking and sleeping, Kris embarks on a picaresque quest to find his “thing”. From sex dreams to performance art to an ill fated 2nd grade talent show audition, Kris deals with bullies and belles through anecdotal stories told from the comfort of his bedroom.

“…and then I woke up” recently enjoyed its first performance in Dallas, where Kris performed a 15 minute segment titled “Sex Dream”. The performance went so well that he has subsequently been invited to perform another section of the show, dealing with his trek into academia and performance art, in the Audacity Solo Salon in December. The full show has also been accepted to the Dallas Solo Fest in May of 2015. Currently, Kris is preparing his original short play “Playing Santa” for the Nouveau Holiday Show in Dallas.