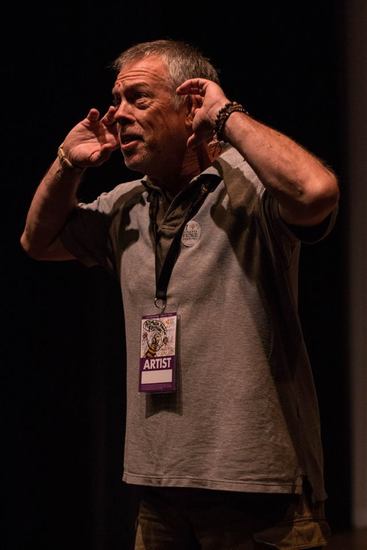 “…it is so, so good. James Carey has such a welcoming storytelling style and you just want him to keep talking forever.” Chris Alonzo, Atlanta Fringe 2016

“A great story, a main character you wanna root for, and a tribute to a country that most of us know nothing about… but will fall in love with…” Abby Schachner, Producer, Hollywood Fringe

“…you will be inspired!…” Rosie Mitchell, The Standard

His house in danger of foreclosure, his girlfriend gone, his business on the rocks and his life in general disarray, theater director James Carey didn’t so much leave Los Angeles as flee it. His destination — and, as it turned out, his refuge — was the country of Zimbabwe in southern Africa. There he worked with school children, taught drama and experienced a spiritual transformation whose effects continue to inform his life today. Coming to Zimbabwe is a stirring account of his life-changing journey. This touching one-man show traces Carey’s own adventure while inspiring those in the audience to seek out new perspectives of their own. After a successful tour of Africa, Coming to Zimbabwe comes “home” to Los Angeles as a special part of the Hollywood Fringe Festival.

James Carey is the Owner of ATTIC STUDIOS which operates the Attic Theatre Center in Los Angeles, California (USA). He is currently teaching at New York Film Academy in LA. He also is traveling internationally as a teacher, consultant, and producer in Africa, Europe and the Middle East working with local arts groups and developing new projects.