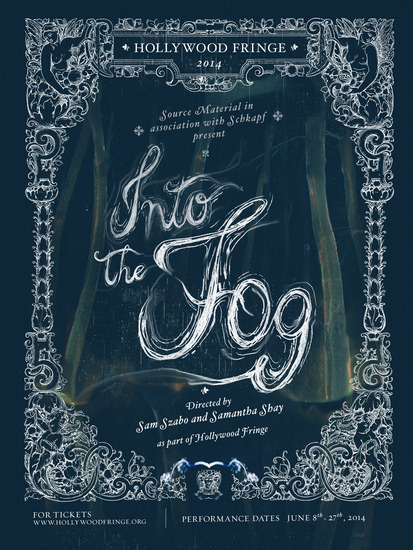 " “In The Fog” A stunningly beautiful piece directed by Samantha Shay inspired by Yuri Norstein’s animated film “Hedgehog in the Fog”. From the first moment they had me, and if they hadn’t ended the show I’d still be sitting there. A feast for the eye. " – Ernest Kearney, WORKING AUTHOR

“Source Material’s Into the Fog is a poetic movement theatre treat at this year’s Hollywood Fringe Festival. Not a literal adaptation of Hedgehog in the Fog, the piece draws on the visual language of the film to create a haunting landscape that becomes the stage for a meditation… There’s a strong sense of power running behind the work, an undercurrent of emotion that doesn’t lend itself to words, but manages to be rapturous all the same.” – See more at: http://losangeles.bitter-lemons.com/2014/06/15/source-material-ventures-into-the-fog-review/#sthash.×48O3uwl.dpuf – Noah Nelson, Bitter Lemons

Artists as diverse as Michel Gondry, Hayao Miyazaki and Seth MacFarlane have all found inspiration in the enigmatic, utterly mesmerizing Soviet animated short, Hedgehog in the Fog. Now this cinematic gem has inspired a live theatrical piece, Into The Fog, from the artistic collective Source Material. Described at the Edinburgh Festival Fringe as “cinematic poetry” and “profoundly moving and totally absorbing,” Into The Fog is a visually striking production that envelops the audience in a mysterious world they won’t want to leave. All ages welcome welcome to this performance. To learn more visit, www.source-material.us