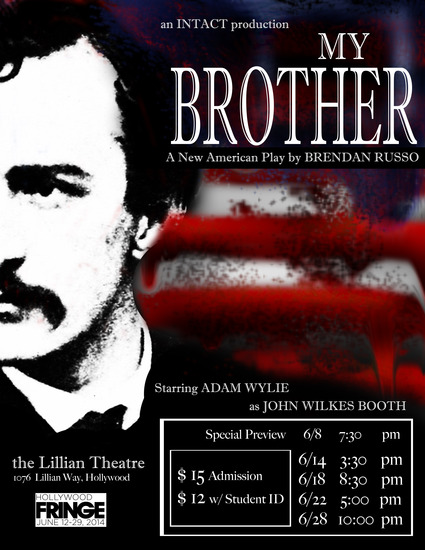 Mid nineteenth-century America. A theatrical
family falling apart at the seams tries to hold
itself together as the country rages in Civil War.
Asia Booth, daughter of the great “mad tragedian”
Junius Booth grows up with her younger idealistic
brother John Wilkes (called Wilkes), holding down
the fort at home, while their older brother Edwin
tours the country’s stages with their father.

Upon Junius’s death, and Edwin’s failure to return
home to the farm, Wilkes grows resentful,
providing for the family as best he can, and
vowing to carry on his father’s legacy on the
stages of the South.

At the onset of the Civil War, the divide between
Edwin (a supporter of Lincoln and the Union) and
Wilkes (a Confederate blockade-runner) grows even
greater. They have become two of the most famous
men in the country, while Asia is now stuck in a
dead-end marriage to a third rate actor who
married her for her family’s theatrical influence.

At the same time, Wilkes becomes engaged to the
daughter of an abolitionist former-senator from
New Hampshire, however like his brother Edwin,
Wilkes is too wrapped up in himself and his career
to engage in a truly meaningful relationship.

With his mind warped by delusions of grandeur, and
utterly convinced that the suffering of the
war-ravaged country is the sole fault of Abraham
Lincoln, Wilkes plans to kidnap the president.
However, with the sudden end of the war, Wilkes
believes that there are no options left: he kills
the president.

The rest of the family is now left trying to
understand the reasons why all of this has
happened. Wilkes is on the run, while Asia and
Edwin are left to finally face the ghosts of their
past and – with the eyes of the entire country on
them – to try and heal.