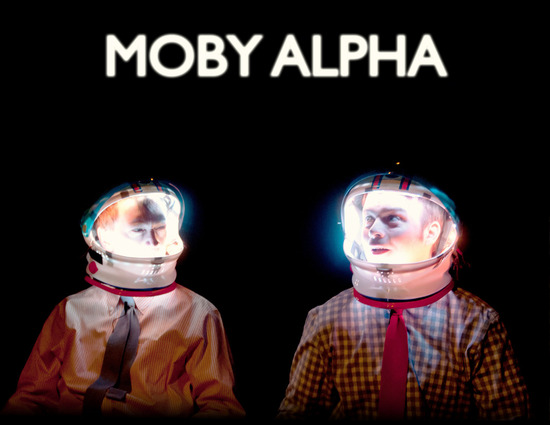 An hilarious homage to classic Sci Fi and bombastic literature, Moby Alpha tells the story of a mad captain’s quest for revenge on the amorphous spacial energy cloud that temporarily took his leg. More simply, Moby Alpha is Moby-Dick in space, but funny.

The show is performed in an entirely dark theater with the only light emanating from the duo’s custom-built million color LED space helmets, creating a unique, otherworldly aesthetic.

Praise for Moby Alpha:
“★★★★ – A clever satire that manages to prank sci-fi and classical culture in the same trip.” – Edmonton Sun

“★★★★ – The two energetic and well-prepared actors set their phasers to ‘funny’ and fire away with brisk wordplay and bright physical comedy.” – Winnipeg Free Press

“Stockman and Armstrong move smartly from character to character, and throw in comedic homages to everything from Alien to 2001: A Space Odyssey to Isaac Asimov… Their ingeniously-designed space helmets [give] the show an other-worldly feel.” – CBC Manitoba

“Skewer[ing] everything from the ridiculousness of their characters’ motivations… to some of sci-fi pulp’s worst cliches, Armstrong and Stockman adroitly move from tight setpiece to tight setpiece with grace and wit.” – The Seattle Star

About Charles:
Moby Alpha is written and performed by Charles, the Seattle comedy duo composed of Chuck Armstrong and Charlie Stockman. Charles has performed throughout the US and Canada, including the Seattle, San Francisco, Chicago, and Toronto Sketch Festivals; the LA Comedy Festival; the Victoria, Toronto, Edmonton, and Winnipeg Fringe Festivals; the People’s Improv Theater New York; the UCB Theatre Los Angeles; and the Comedy Central Stage Hollywood.