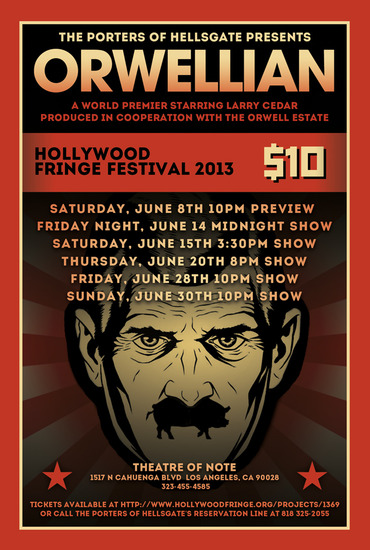 The Porters of Hellsgate Theatre Company present; Orwellian: Rants, Recollections, and Cautionary Tales From The Works of Eric Arthur Blair

Actor Larry Cedar (Deadwood, The Crazies) developed the script and stars in this dark examination of the work of an author so prescient that his name has become an adjective.

Enter the dystopian world of George Orwell via this one-hour adaptation based on three of his most popular works. Through his literary prism, visit the chaotic kitchens of Down & Out in Paris & London, a barnyard on the brink of creature revolt in Animal Farm, and the futuristic hell that is 1984.

The Porters of Hellsgate are producing this play in conjunction with the Orwell estate.

the porters of hellsgate *