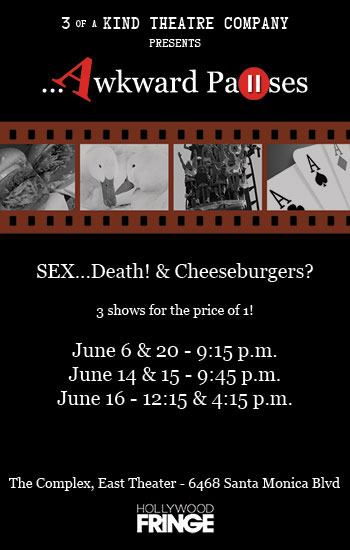 SEX…death & cheeseburgers? 3 shows for the price of 1!!
Discover the joys and challenges of sex after marriage. Strap in for the ups and downs of a new relationship. Learn that truth is in the eye of the beholder during this 1-hour of comedic, yet thought provoking, theatre!

What viewers are saying about “…Awkward Pauses” -

“The direction, the minimal set design, the acting, the writing, EVERYTHING is spot on in this trio of comedies”

“…Awkward Pauses” is easily one of the best shows I’ve seen so far at Fringe this year."

“I wasn’t really certain what to expect when I took my seat, but what I found was 1 hour of enjoyable & thought-provoking theater well worth the price of admission.”

About 3 of a Kind – Back in 2004, a few writers got together in an effort to strengthen their work in progress. After a few table reads among the group, the writers came to the realization that hearing actors read the parts might prove beneficial. It wasn’t long before they invited directors to come in and stage the scenes during their weekly meetings and 3 of a Kind Theatre Company was born. Writers, Directors and Actors all working together on a weekly basis to create and produce dynamic original theatre.

This is a sampling of 3 of our favorite scripts from the past few seasons.

You can learn more about us by visiting www.3ofakindtheatre.org