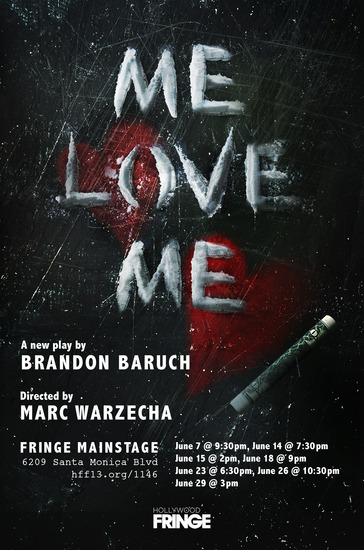 CRITICS AND AUDIENCES LOVE “ME LOVE ME”!

"[Playwright Brandon Baruch] has crafted a winner and brought in a cast that was up to the challenge of his complex script. Check it out for yourself – but leave your inhibitions at home… – Bob Leggett – LA Examiner

“Benjamin Durham somehow retained some amount of likability and charm while portraying the reprehensible, drug-crazed Tuck. Lizzie Adelman became a rock for the believability in her magnetic performance as the voice of reason, Gemma. Playing out chief the comic device of the play is a heavy load, and Sto Strouss was not only able to carry that load, but illuminated the stage in his dopey, yet delightful realization of Cluck.” – Tony Bartolone – plAYwriting in the city

“This play is at both times funny and disturbing, as it steers us down paths that make the viewers shift in their seats. Actor Benjamin Durham was convincingly deplorable… Actress Lizzie Adelman was endearing, and had a chance to shine during her segment as performance artist. She cackled in an oh-my-God-I’m-going-to-have-a-nervous-breakdown kind of way, and we ate it up.” – Fayeruz Regan – Viva Los Angeles

"’Me Love Me’ is a really brilliant dramady piece that can make you wonder: What would happen if I met myself? It just may open your eyes to think about being a better example to yourself, in case you need to put your best impression forward if YOU knock on the door. – Mary Lansing – Along Comes Mary

“‘Me Love Me’ pulled off something else, and that’s the weight of reality… I forgot the real world existed. What was happening on stage was real for the briefest of moments.” – Spencer Cotter – The Detective

“The writing borders on smut at times and poetry at others, filled with raunchy one-liners and dialog so believable it can cause deja-vu.” – Audience Review

“An insightful and comedic look at drug abuse, codependence, and narcissism. The script is a delight – full of wit and flair – and the show is brought to life by good acting and solid direction.” – Audience Review

“The writing is alternately quirky and broadly funny. And, at times it is affecting. The performances are brave and sincere. Definitely recommend this!!” – Audience Review

“Hilarious and endearing, ‘Me Love Me’ should definitely be on your Fringe ‘To See’ list. Don’t miss it!” – Audience Review

“This script is great! A fantastic inventive and playful script that had a strong plot and themes along with personal touches from the playwright that were both tragic and refreshing.” – Audience Review

A new play about a man, his girlfriend, his biological clone, and their poor life-choices.

“Tuck Whitney loves himself, cocaine, and his girlfriend. In that order.”

Tuck is a libertine with a coke addiction and a middling acting career. Gemma is his pill-popping, performance artist girlfriend. When Tuck’s biological clone is released from a lab, the two men embark on a tear of booze, drugs, and clone-sex, leaving Gemma to pick up the pieces and try to move on.

Written by Brandon Baruch
with the Cast