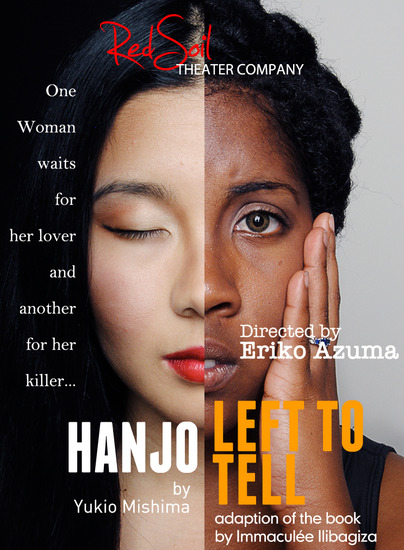 One woman waits for her lover, another for her killer…

HANJO is a tragic and yet extremely beautiful story with such rawness of words and bodies. It is a story of waiting… as an active choice. Can you wait for something forever without a guarantee that you would get it at the end? Is it stupid to keep waiting? Does that person you are waiting for actually exist or is he your mere imagination? Can an artist intrude somebody else’s life for the sake of art? Is that right? Is that justified?

LEFT TO TELL is a story from Rwanda in April 1994, where neighbors, friends, and families, who shared the same land and beliefs, killed each other one by one by hand. It all started when they were given ID cards to which “superior” or “inferior” tribe they belonged to by German settlers. The number of the victims reached 800,000 in 100 days.

This unimaginable story will be told with so much humor, raw truth, and interesting theatricality. This story must be told.

““Hanjo” may well leave you with a lot to think about, but “Left to Tell” will leave you trembling in your boots.” – LAist

“As if the story of the Rwandan genocide that occurred in 1994 wasn’t powerful enough to grab the audience, the actors illuminating Azuma’s adaptation are absolutely brilliant in every way.” – Long Beach Examiner