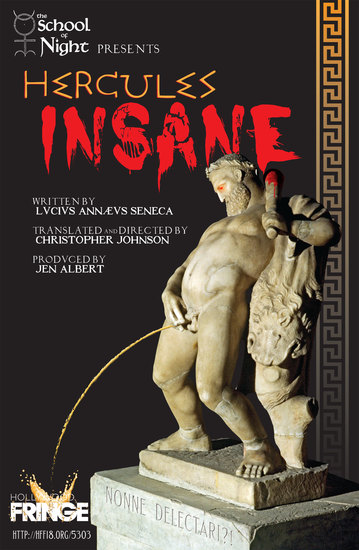 Hollywood Blvd will be CLOSED from Highland to Western on Saturday from 7am – 5pm for the L.A. Cultural Parade. Please make sure to plan accordingly. Many people missed shows last year as a result.

The company that brought Punch and Judy and The Faggot King to the Hollywood Fringe, makes our next offering to the gods….
HERCULES INSANE!

Juno, Queen of the Gods, is pissed. It’s bad enough her husband Jove has a habit of seducing mortals. But it’s intolerable such an infidelity has spawned the semi-divine hero Hercules. By dispatching countless monsters to eliminate Jove’s bastard, Juno has inadvertently furnished him serial triumphs to cement his fame. And now Hercules has invaded the underworld to conquer death itself.

But Juno has one last trick to try. Employing darkest magic she curses her hated stepson to go insane.

When Hercules returns from the underworld to discover Greece conquered by a tyrannical warlord, he leaps into martial action in his homeland’s defense. His certain triumph may prove short lived, however. For when Juno’s curse takes hold Greece will face the unstoppable wrath and violent rage of a demi-God gone murderously insane.

Are you not entertained?!