Live from The Hobgoblin, it’s Hank! 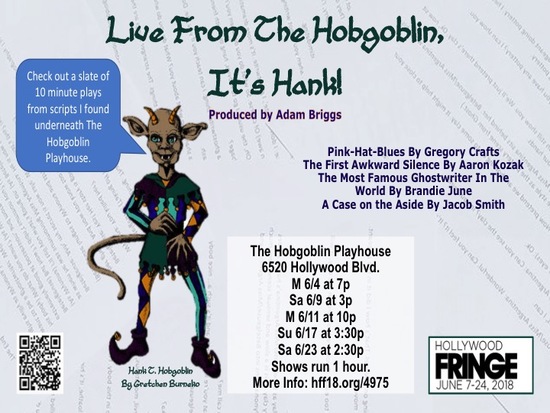 Hank T. Hobgoblin and his team present a slate of 10 minute plays from scripts found underneath The Hobgoblin Playhouse:

A Case on the Aside
Written by Jacob Smith
Directed by Kelly Coughlin
Starring Adam Briggs, Heather Lynn, & Madeleine Miller
Ray Stone is the greatest, smartest, most serious, and handsome private eye the world has ever known. He could solve your case and anyone else’s case with ease…as long as he doesn’t get in his own way.

The First Awkward Silence
Written by Aaron Kozak
Directed by Ann Hurd
Starring Grant Patrizio, Soda Persi, Heather Lynn, Graydon Schlichter, & Adam Briggs
In this boy meets girl love story, a guy has a theory that the future of a couple’s relationship is dependent on their first awkward silence, which is then put to the test.

The Most Famous Ghostwriter In The World
Written by Brandie June
Directed by Ben Russell
Starring Madeleine Miller & Graydon Schlichter
In this nostalgic parody, Wynona meets her idol, Betelgeuse, hoping to learn more about his job as a ghost-writer. Wackiness ensues as the two realize both are neither quite as they seem.