THE SECOND COMING OF KLAUS KINSKI 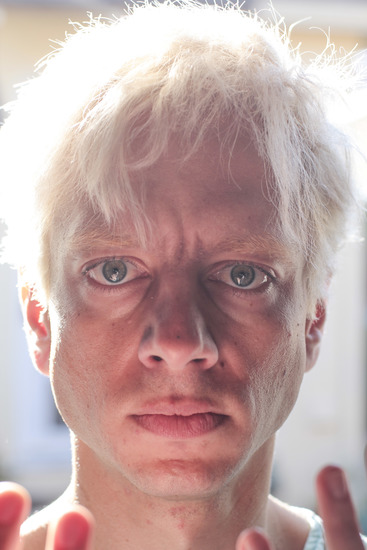 BEST OF THE FRINGE – TheTVolution Awards

Before his famed collaborations with director Werner Herzog, Klaus Kinski was a tortured B-movie character actor who had become a touring sensation for his live wire theatrical performances. It was during this time that Kinski starred as Jesus Christ in a one-man show that had taken him a decade to write. Audiences were outraged at Kinski’s audacious portrayal of Jesus and heckled him mercilessly. After only 2 performances Kinski canceled the tour.

It’s now 2017 and actor-writer Andrew Perez (David Miscavige in “My Scientology Movie”) does battle with Kinski’s demons in an effort to resurrect him and finish the job in one last command performance.

People will tell you he is dead. Don’t believe them!

Klaus Kinski (1926-1991) is one of the most celebrated and controversial actors in the history of world cinema. His collaborations with director Werner Herzog (Aguirre, the Wrath of God, Nosferatu, Fitzcarraldo) were as transcendent as they were tempestuous, and Kinski’s indelible performances and wild persona continue to captivate.

Fifteen years ago, Andrew Perez discovered Kinski through Herzog’s documentary “My Best Fiend” and was inspired to dig deeper into Kinski’s life, conducting a series of interviews with Kinski’s closest friends and neighbors in Lagunitas, CA – where Kinski spent the last ten years of his life. This resulted in a one-man show at Northwestern University called “I Am Kinski,” comprised entirely of Kinski’s own words. After a decade of living with Kinski, Andrew now goes a step further and re-imagines “The Second Coming of Klaus Kinski.”

“The Second Coming of Klaus Kinski writer and performer Andrew Perez presents Kinski and all his demons with such unnerving commitment that the stench of sulfur burns the eyes of the audience. It is not so much a portrayal by an actor as the actor’s possession by the character. And it is riveting to behold…Perez captures in Kinski’s raging that cataract of pain that was the source of his talents; giving truth to the statement that every human being is an abyss…Aided by Adele Cabot whose voice provides brief counterpoints of sanity, and under the amazingly adroit direction of Eric Johnson, who manages to choreograph this volcanic caldera of creative chaos, Perez delivers perhaps the most gripping performance of this Fringe. Or of next year’s Fringe for that matter.”

“…this is a performance that you should not miss. The audience I was with was mesmerized, the only time so far I have seen this year at Fringe that an audience actually demanded a second curtain call from a performer. I cannot stress enough how deeply moving, scary, sexy and disturbing Perez is in this show. The man may be part demon. (I mean that as a compliment.)…Under Perez’s spell, you see the human aspect of some really horrid behavior. That’s quite an achievement…This is a man fighting desires that he feels might consume him, living to the fullest his passions, hopes and fears. The intensity is incredible and Perez manages to convince that this is, indeed, a life and death matter.”

“The performance of Andrew Perez as Klaus Kinski is riveting, endearing and horrifying all at once. Hands down the most amazing performance I have seen at this year’s Fringe.” -Russell Eaton

“Andrew Perez was phenomenal!!! If you even remotely know who
Klaus Kinski is— even if you don’t— WOW! Wtf did I just see? Amazing! Speechless! Bravo!!” – Natasha Lewin

“I am a massive Werner Herzog fan and I love the films he did wit Kinski…My biggest concern before the show was, “would I be scared of this man? Would he make me feel like anything could happen? Like he could come unglued and cause bodily damage to himself or myself? The answer is a resounding, “yes.”…But more than this, Perez reveals Kinski’s sensitive side. For those who don’t think he has one, pay special attention to the scene in Cobra Verde where he’s watching the children sing and dance and when a butterfly lands on his hand. You can see the broken, sensitive boy that he spent his life trying to protect, and Perez makes a point to highlight this side of the legend, turning this enigmatic figure into something far more human than the demon he’s typically thought of as being.”
-Rich Silverman

“Andrew…there are just not enough perfect words to tell you just how much I loved every moment…but here are a few kinda good ones…;) I thought you were truly inspired, wondrous and mystically magical. Every color of the emotional palette was explored, exposed and illuminated in ways I could not have predicted or imagined. You brought humanity and understanding to KK and beyond…imploring us to look into our own spirit to find the darkness and the light and learn what they can teach us. Thank You with all my heart for all you give and all you Are. Eric Johnson…thank you for everything… Together, you and Andrew (and all involved) have created something that is far beyond the mere sum of it’s parts. Sheer Bliss…every moment on this roller coaster ride of laughing, crying, heart ripping, terrifying and death defying twists and turns had us begging for more. Bravo~!!!” – Cheri Pierce

“Andrew Perez is passionate and inspired! He packs more energy into one hour of theater than most people do in a year of their lives. Come to see an incredible, no-holds-barred performance, and stay for the moments of charm where Andrew’s charisma shines….Make this into a movie dammit! Not to be missed.” – Megan Rosati

“Andrew Perez delivers a totally committed performance from inside Kinski’s head that neither demonizes nor exonerates this controversial figure. The passion he brings is bottomless, making the hour captivating for the audience and clearly unrelenting for Perez….A lot of background work obviously went into this. The writing from Perez and the direction from Eric Johnson hone what could be a cathartic explosion into a dramatic piece of theater, whether you’re familiar with Kinski or not.”
-Justin DiPego

“This show is thought provoking, entertaining and leaves you satisfied because you were just handed an experience. Andrew Perez takes you on Klaus’ ride but you feel like you’re watching yourself the whole time. I’m still in awe of Mr. Perez’ performance. He pulls no punches and doesn’t cheat his audience at any turn. Loved it.” – Nando Miguel

“Andrew Perez takes you on an absorbing, journey into a time in the life of Klaus Kinski. Even if you are not familiar with Kinski’s legacy, from the first moment of the play, Perez pulls you – ready or not – on a bumpy, wild ride into the mind of this passionate, tortured soul…The fiber of Klaus’ life is woven, unraveled, and rewoven. And by the end, there are a few loose threads you’ll still wish to pull.” – Dawn Joyal

“Andrew Perez creates a mesmerizing portrait of legendary actor Kinski as he literally shape-shifts into the body of this force of nature. Perez is an alumni of Northwestern as well as Steppenwolf, and his tools as an actor and performance artist are on full display as he creates a one-man show to rival even solo masters like Hal Holbrook. I saw the show Saturday with a good friend who had worked with Kinski two decades previous on a film in Rome (“Crawlspace”) and—having gotten to know Kinski somewhat on location—his assessment was that Perez absolutely nailed Klaus’ persona, behavior, and interior life.”
-Steve Nevil
•
•
•
PRESS FOR ANDREW PEREZ as David Miscavige in “My Scientology Movie” (now in select theaters, iTunes, Amazon, & VOD via Magnolia Pictures):

“Riveting – not least because the team’s chosen thesp, Andrew Perez, is so persuasive as the religion’s externally glib but possibly paranoid leader. Astonishing performances in documentary re-enactments are rare indeed, but Perez barrels in as a man possessed, seemingly channeling several ‘Glengarry Glen Ross’ characters at once…”
- Guy Lodge, Variety

“Andrew Perez, a gifted, intense Los Angeles stage actor, steps into the film and delivers its most dazzling moments… a violent Miscavige freak-out in a corporate office, in which Perez becomes possessed by a bullying rage that’s truly terrifying to watch. Even in straight dramas, you’re not likely to see a scene as live-wire and treacherous as this one.”
- Joe McGovern, Entertainment Weekly

“Andrew Perez captures the zealous set of Miscavige’s features uncannily, and imagines his leaps to fury with disconcerting plausibility… which gives such sequences a bit more of a meaningful thrust.”
- Tim Robey, The Telegraph

“Eric G. Johnson and his cast keep the show moving at a nice pace. There are laughs and pathos seamlessly bound together.”
-Rob Stevens, Haineshisway.com

“‘Starfucking’ works…The scenes, for all their audacity, are etched with a calm dignity, and clever writing that display a twisted appreciation of the absurdity that expresses itself in what people desire, or tell themselves they do…Johnson’s craft is apparent in the trust he shows his cast and the material, a trust that allows him to place before his audience a piece that is not unlike a Japanese puzzle box…DeCordova, opens the piece on the perfect note of understated truthfulness…Kelly Schumann is touching…Blaine Vedros is excellent…Smith executes with stunning skill…Dawn Joyal brings a sweetness and vulnerability to the part…Yoder and Allie bring all the uncertainty these two characters share and forge it into a bittersweet conclusion.”
-Ernest Kearney, LA Bitter Lemons