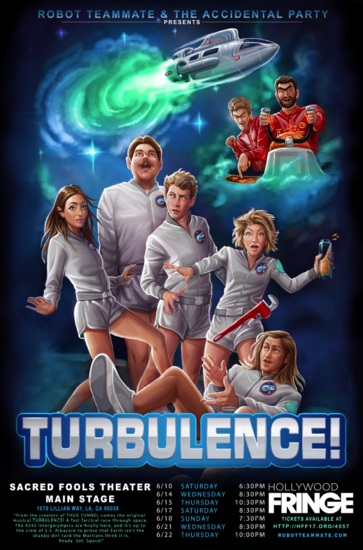 The 4242 Intergalympics have arrived and the bitter rivalry between the people of Earth and Mars is at an all-time fever pitch. An epic race around the Sun concludes the games, but when an untimely incident renders Earth’s competitors unable to race, a ragtag crew must step in as last minute replacements. Will they succeed? Find out in this high-speed, high-stakes original musical comedy from the creators THUG TUNNEL. Ready. Set. Space!

ABOUT ROBOT TEAMMATE:
Founded in 2012, Robot Teammate has established itself as one of LA’s premier musical comedy groups, wowing theatergoers by creating improvised musicals based on audience suggestions at venues including UCB, iO West, Westside Comedy, and LA ComicCon. In 2015, they began scripting their improvisations with the original space(time) opera, TIMEHEART (Nominee – Best Musical). Their 2016 dystopian musical THUG TUNNEL received A Little New Music’s Outstanding Songwriting Award and was nominated for Best Musical, Best World Premiere, Top of the Fringe, Ripest Show, Most Orgasmic Writing, two Most Unleashed Performance nominations, and the Spirit of Fringe Award.

“Robot Teammate creates musicals for the millennial generation.” – Gia on the Move

“Robot Teammate is always worth watching. Their storytelling is top-class, their musicality is hugely impressive, and, above all, they are properly funny.” – Ewan Phillips, Producer, Whose Line is it Anyway?