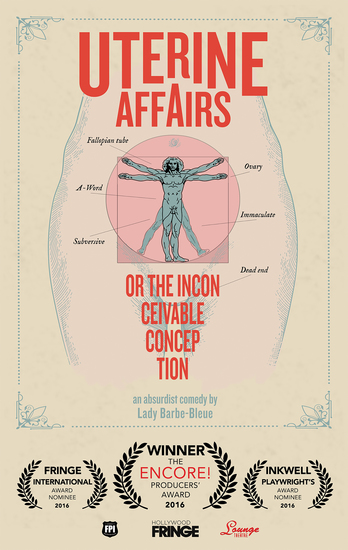 WINNER of the ENCORE AWARD! Nominated for the 2016 FRINGE INTERNATIONAL AWARD and the INKWELL PLAYWRIGHT PROMISE AWARD!

Can a virgin be forced to live happily ever after? Or will she be guillotined?

When Mary Joan Holy visits Dr. Gabriel, the world-famous Freudian gynecologist, she has no idea that she is on her way to commit a crime against humanity – or worse, a war crime. Throughout her travels, she will be confronted with a variety of egocentric, quirky characters who will leave her no choice. Will she unravel the mystery of the Inconceivable Conception? Or finally disgrace herself?

There are no answers in this absurdist comedy. Only the suspicion that absurdity is closest to reality.