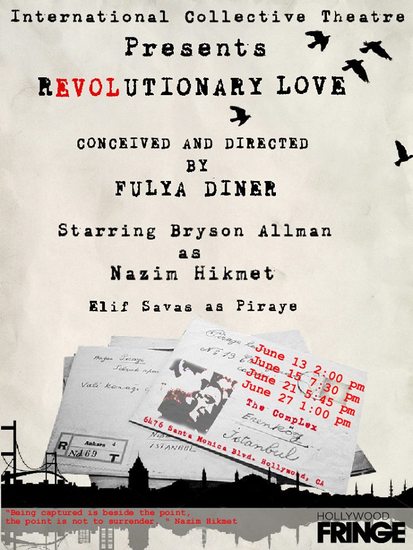 Nazim Hikmet was a world famous Turkish poet, a romantic revolutionary venerated as one of the best of the 20th century. He was imprisoned for his views on life and politics, for his struggle against the oppression of mere ideas, violating no law but for merely expressing his beliefs. His love of his countrymen, of his homeland of Istanbul, of his language, of his craft, and the love of his life, Piraye, his one steady partner in his fight for freedom, kept him going through it all. Only recently his homeland of Turkey returned his citizenship long after his demise in 1963.

Revolutionary Love sheds light on the solitude, the struggle, and the immense heart of this poet through dangerous miracle of his poetry. Our aim is to lift the spirit of Nazim from the isolation of the prison cells of which he spent more than 15 years of his life and present him to the American audience afresh, to inspire, and to make living, to make real, what he feared was lost in those prisons.

" Being captured is beside the point, the point is not to surrender. " – Nazim Hikmet