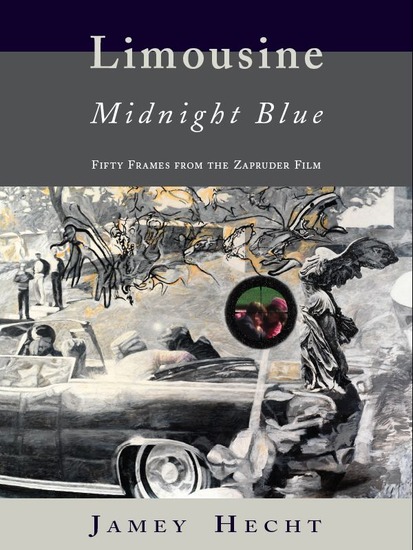 Limousine, Midnight Blue is a sequence of 36 poems of 14 lines each. It uses the famous and appalling “Zapruder Film” of JFK’s death as a prism through which to view America and the world. Refracted rays touch on crime and punishment; guilt and responsibility; charisma and love; the dying victim’s experience during the stretched-out seconds of his violation and death; and the dark world of war profiteering, narco-traffic, and deceit where the facts of power determine history. Epic tradition (e.g., Homer, Dante, Milton) shares the stage with science, religion, and popular culture. BACK, AND TO THE LEFT is a haunted show based on a haunted book about a haunted film of an event whose hungry ghosts still walk the American unconscious, rattling their chains louder every year.

Billy Collins (the popular two-time Poet Laureate of the U.S.) described the book this way: “Ovid himself might have taken notice of this volume. It’s one thing to turn a woman into a tree, another more advanced thing to transform fifty frames of the Zapruder film into as many sonnets. Limousine, Midnight Blue is a radical display of poetry’s ability to freeze time, to catch fugitive-and here, disputed-moments in the amber of form”.

A translator of Sophocles and Plato, Hecht has written on the disaster of 11-22-63 in the pages of Counterpunch, Media Monitors Network, Global Outlook, The Kennedy Assassination Chronicles, and www.fromthewilderness.com, where he was Senior Staff Writer from 2003 to 2006. Hecht has spoken at conferences of both J.F.K. Lancer and C.O.P.A. (the Coalition on Political Assassinations), and edited the books Crossing the Rubicon: The Decline of the American Empire at the End of the Age of Oil by Michael C. Ruppert, and Someone Would Have Talked: The Assassination of President John F. Kennedy and the Conspiracy to Mislead History by Larry Hancock. Hecht has taught world literature at various universities on both coasts, and his poetry and prose have been published in a wide variety of scholarly journals and literary magazines. He has recently acted in many Shakespeare productions in L.A with the Porters of Hellsgate Theatre Company, with whom he is a company member, and has acted in Greek Tragedy in NYC and LA, the latter also being with the Porters.

the porters of hellsgate *